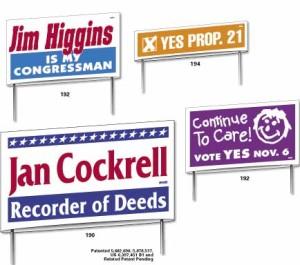 Have you looked at how much yard signs cost? They’re about $7 each, unless you order a few hundred, then they’re only $3.50. Gee, what a deal!* The standard yard sign is the Gill #192. It’s 26” wide by 16” tall, sealed on three sides and comes with a steel wire shaped like a giant staple. Here are a few simple ways to cut costs and maximize benefit of this necessary evil on the campaign trail.**

A. All they need to see is your name, so don’t blow the budget on signs. Unless you’re campaigning for Federal office and have millions of dollars flowing through your campaign coffers, just stick to a 1-color sign. To add some depth and dimension, you can use gradients of that color so it looks like you have different colored stars, or your first name is in a different shade of the base color. Gradations can accomplish similar impact as a 2-color sign and you save 1/3+ of the cost.

*If you need yard signs for the 2012 campaign, call me ASAP – yard signs are on sale up to $0.60 off per sign through the end of February!

**My opposition to yard signs for certain races is well-documented (http://www.stephaniesharp.com/issues/archives-2003-2009/the-sharp-record-2009/the-sharp-record-april-5-2009). They have their place (NOT IN THE RIGHT-OF-WAY) and can be effective when used appropriately. I recommend them for high-density races – city council, school board, State Representative and most State Senate races.